Have you just completed the half term break or is yours just beginning?

For the most part the half term week was quite quiet; we had a few low key indoor days, play dates and baking sessions (before the oven broke!). Soft play, museum, Nandos… oh and the washer broke!

The weekend was when it really stepped up a notch!

We went to Blackpool on the Saturday and stayed over in a castle, the kids both loved this touch! Austin thought we were going to a wedding, apparently that’s where people get married, in castles?! They then came to conclusion that the queen had let us borrow her castle and we couldn’t wake the dragon up – a child’s imagination is simply the best!

They were both so excited to play on the beach and I was excited for them to do a free activity considering the cost we are racking up with all the broken appliances. I was that determined that this was going to be the most frugal visit to the seaside to date that I packed picnics and even breakfasts to keep costs down.

We arrived at Blackpool at around 11:30am, I did a partial check in to save time later, we got the food and the bags we needed ready for a FULL DAY ON THE BEACH! We ran to see the sea! And boy did we see it, right up to the walls, completely covering the sand! Not to worry we were quite far away from the action, so we hopped on a tram to The Tower, but it was the same there, no sand, no beach, just miles of ocean as far as the eye can see… I mean it is Feb after all, I just didn’t think to check this minor detail. So now what are we going to do for a full day, until bedtime with a four and two year old, who were also starting to complain of being hungry and cold and that it was too windy. Not the most idyllic of picnic weather. We took refuge in KFC. The kids had their yumboxes and me and daddy got a fillet burger and zinger tower meal while we planned our new course of action.

We came to the only answer possible; hit the arcades! I came loaded up with the penny jar, so we could blow it all on 2p slot machines anyway, I just never thought we would be using it within the first hour of arrival! The kids loved the arcade, they loved playing the slots and gambling away their winnings as soon as they got them! Once the money ran out, they went on a ride, this was amazing value compared to fairground rides by comparison, it was a mini roller coaster in the Coral Arcade – a long track with swirls and ups and downs for the bargain price of £1 per child!

After this we visited the pier to ride the BIG wheel. Austin has been on it before, and he had just been on a mini (but still big) one in our local town too, he begged to go on, but I knew he wouldn’t like it. I mean, I was getting a little light headed at the top of it with the wind spinning it. He HATED it. Absolutely hated it, he was crying and screaming, there was a group of teens in the next car who were screaming and that was making him hate it more. Oh and did I mention the wind was spinning it?! (And daddy spun it to get a selfie with the tower in the background…) As we got off the chaps running it asked if he was OK, yep, he was fine, nothing a little ice-cream couldn’t fix.

No trip to the coast is complete without hot fresh donuts and ice-cream, we sat on the floor and watch the seagulls behave like vultures diving for scraps while we figured out our next plan of action. It was right in front of us, head up the Tower! Who knew there was a soft play in there?! Not me! So they had an hour in the soft play which was the king of soft plays! After a big play, they decided they were starving, again…

I don’t how this has become a tradition but when we’re in Blackpool we always go to Pizza Hut to share a couple of large pizzas between us and hit up the salad bar. We were in there hours, we definitely got our moneys worth out of that salad bar! I say we, Georgia was just having bowl after bowl of coleslaw, but there’s carrot and cabbage in there too, right!?

Time to head back for a tram to our hotel and go check out our sleeping quarters. They were huge, plenty big enough for the four of us. Even the bathroom was massive, which me and hubby turned into a sitting room so we could share a wine and the leftover pizza (don’t judge the toilet was a good mile away from where we were sitting!).

Time to call it a night as we had a busy day planned for the Sunday, something I had kept completely secret from the kids.

I imagined it was going to blow their tiny minds! We were going to play Dino Falls Adventure Golf! I was so excited about this part of the weekend, I hadn’t told them about it, so there was no expectation on their part, no let down like with beach fiasco.

We drive past Dino Falls each time we visit the Trafford Center, and every time they beg to go in. And today we were going! As we approached I shouted “Everyone look out of Austin’s window, I can see some Dinosaurs!” the excited looks and shouting of “I want to go!” were this time met with “We are! We’re going to see the dinosaurs!” I was very kindly gifted a family day pass for the four of us, so while I did some important Instagram work and shared the live footage with the followers the kids were excitedly getting ready to go in!

We checked in, got our clubs, mini ones for the kids, we selected our own balls and grabbed a pencil and score sheet (which I just gave up trying to fill in, clearly we weren’t playing competitively). Daddy took his go first, and the jammy bugger got a hole in one… Austin was up next, it was difficult to play and capture footage for the ‘gram at the same time, so I just became official camera crew.

Except, Austin wouldn’t move. He was scared of the dinosaurs. They were big, they made noises and moved the smallest amount, but he was positive they were going to eat him. Now this kid knows his dinos; he knows which are carnivorous and herbivores, but in this moment in time he was sure that a steggy was going to get him. He was passing his irrational fear onto Georgia who was also positive she would be eaten, so we had to step out of the game for a moment, allow other players to take their turn while we made him see sense. He soon calmed down and had the time of his life. He knew the goal “get the ball in the hole (in as few hits as possible)” and that is what he was doing, it definitely looked like he was playing croquet instead of golf but he had a great time. He even fluked a hole in one when he chanced the rapids!

Georgia soon forget to show solidarity with Austin and decided she really liked the dinosaurs and was just wandering around looking at them, and I like to think reading all the fun facts too. She also had a go at a few holes too when the fancy took her, and she even managed to get a hole in one!

We had a really great morning at Dino Golf and will definitely be back when they’re older to enjoy a real game. If you’re considering taking your young children to any crazy golf, I would still recommend it but be realistic about the ‘game’ and just let them have a free run. It got very busy with other players queuing up behind us, so we stepped out and went back to some free quiet holes to just play for fun, which was the best idea all round!

We stopped off in the cafe for burgers, and the kids had a T-rex lunch box, they were disappointed that it didn’t come in a lunch box, but they enjoyed building their own parts, choosing a drink, fruit and crisps, it was a massive portion so plenty to save for the car journey home too!

I have really enjoyed this half term week off, and I hope this hasn’t come across as a ‘braggy’ blog post. With all situations in real life, there have been good, bad and ugly moments, I’m just trying to focus on the good bits for my own sanity – it doesn’t mean there hasn’t been shouting (from everyone) fallings out (from everyone) and ungrateful demands (from everyone!). Oh, you want an ugly moment too, a certain someone getting very car sick on the way home, and a certain someone else screaming that she needed a poo despite me asking her to go before we left Dino Adventure golf. Screaming for miles, as we were miles away from the services, screaming that she couldn’t hold it, I’m so surprised she did as I forced her onto the potty as we did an emergency stop at the next services. Its moment like this that are making me not want to get a license.

And home for a beer to steady my nerves!

You can always drop me an email too at toddlerandtoast@gmail.com

If you want to know more about Dino Falls Adventure Golf, check their website out https://www.dinofalls.co.uk/ 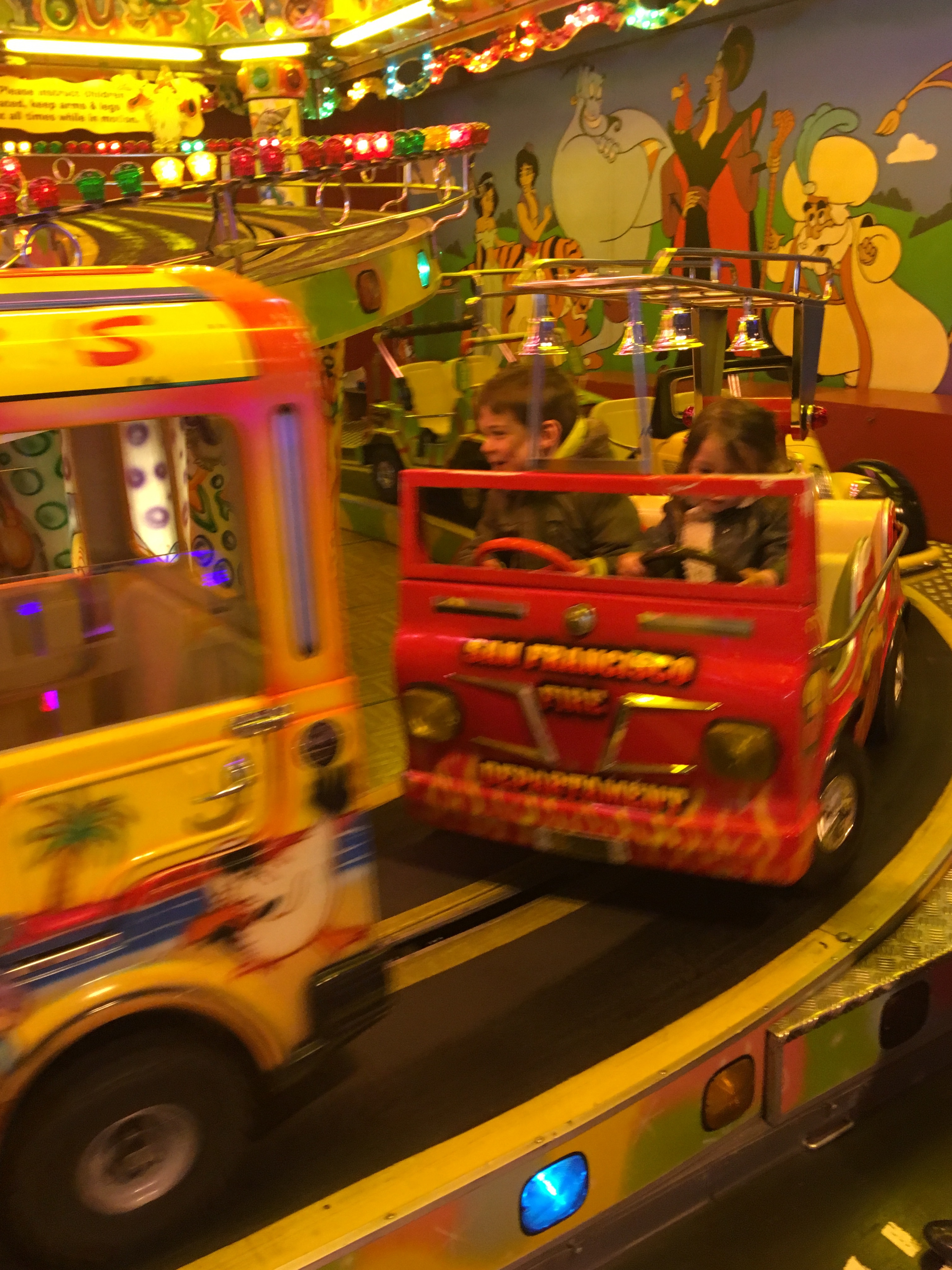